ORDINARY PEOPLE MAKING AN EXTRAORDINARY DIFFERENCE
CASSI'S STORY
​
With both parents being drug addicts, and a mother with abusive tendencies, Cassi had a harsh beginning. Though still sharing bonds with her biological father, her environment proved unsafe and she was removed from her home at only 5 years old.

Once removed, she was placed with her aunt, and for a time this seemed like the right placement. Soon after, Cassi’s younger sibling, a 2-year-old brother who suffered from a genetic disease was also removed from the home and placed with his sister, also in the care of his aunt. But after living with her aunt for over 12 years, there was a shift in their environment: Cassi’s aunt developed signs of mental illness and was later diagnosed. Once DHS stepped in, it was revealed that she was addicted to pain medication, and her abilities as the primary caretaker for both children began to decrease.

During an appointment for her younger brother’s illness, a doctor noted that the the young boy was not being cared for properly, and it was reported to DHS. This resulted in both children being placed in safety services for 30 days. It occurred to Cassi that living with her aunt may not be a safe option anymore, and she began to consider speaking with DHS in the hopes of herself and her little brother being removed permanently. So with the support of her boss, someone who had stepped into the role of not only a mentor but also a secondary parental figure for Cassi, DHS was contacted and met Cassi and her boss to talk about her situation.

During the discussion and transition phases of Cassi and her younger brother’s possible removal, the police were called to respond to an incident that had occurred in their home; affirming DHS in their contemplation of transitioning both children out of their aunt’s care. Once removed, however, Cassi and her brother weren’t able to be placed together. And while her little brother was placed immediately, Cassi sat in wait for two entire days before she had news of what lay in store for her;

“ I did nothing but play life 101.9 on the radio and pray for those two days. I cried in tears of joy, pain, sadness, loss, and fear.”

But there was an end to those two days, and the results were better than she could have imagined: Cassi’s employer and mentor would become her foster mom.
​
“I was so happy. I cried in her arms. God had answered my prayers after 12 years. I finally could have a life I always wanted, a life without fear, constant stress, anxiety, and emotional abuse.”

Though the coming adjustments would prove challenging for everyone involved, Cassi was able to find confidence in knowing that this would not only be her last placement but her first forever family. 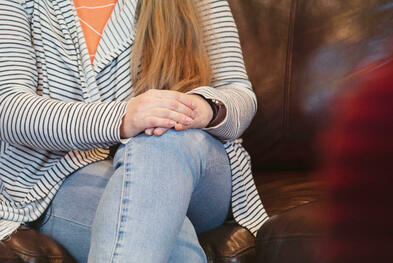 The questions hung there, unanswered, growing stale. This was the moment when first time Cedar Valley foster parents Natalie & Matt sat down with the six-year-old they were fostering to tell him of his next placement. However, there was little information to give.
​
Children in the foster care system often find themselves in situations of inconsistency; and while decisions about their current and future whereabouts are a collaborative effort, the trials of adjusting are something that a child is left to navigate themselves.

Natalie and Matt took their first placement in early September, welcoming a one-year-old girl and a six-year-old boy into their home, in addition to their two biological children, a son who was also six-years-old, and a four-year-old daughter. Natalie laughs when she tells us that initially, the two boys’ competitive attitudes made things interesting. The toddler they were also fostering was making connections and bonds as well, often even in tears when she was left without her foster parents for even a short amount of time.

Before they knew it, Natalie and Matt were 5 months into their first placement, and for what could have been the first time in these two children’s lives, love and security were finally being established.
“we got to a place after they had been with us for about 5 months, where we were all in a good spot, and the kids were sleeping and eating and the oldest was doing great at school, and the kids had bonded.” - Natalie

But living life within the foster care system, for both guardian and child alike, means that there are always changes on the way, regardless of whether or not you see them coming. Due to a miscommunication in terms of privacy, Natalie and Matt were left to re-evaluate their situation; unsure how to move forward. After some extensive discussion with partner resources and support from other foster parents, the two came to realize that their best option was one of the hardest calls for a foster parent to make: the decision to disrupt the placement.

And while the shift from loving home to loving home may not seem like a big deal to some, this move is still extremely harmful to the development of a child in the foster care system. It goes without saying that there is still trauma in transitions where routines are broken, attachments are severed, and healing is interrupted.

Natalie and Matt never expected to have to make this decision, and they were beyond heartbroken. Natalie explains that after having given a months notice to their caseworker before the transition needed to occur, the first time foster parents prepared the two for the move with great care and sensitivity;
“We’ve heard of kids getting moved from foster homes and they just cram a couple of things into garbage bags and send them out the door, but we wanted to try to treat them in the same way as if we were moving our own kids somewhere, we tried to box up everything nicely and label it and we sent with them everything that was theirs.”

“Because they’d been with us over Christmas, Natalie interjects, through tears, “they’d gotten toys, they’d gotten gifts….”

As the transition to a new placement finalized, Matt, Natalie, and their biological kids said their goodbyes. What couldn’t be foreseen, however, was how difficult this was on their bio kids as well;
“Before they were even out in the car our bio son just started sobbing and our daughter has asked about the baby girl quite regularly since then,” Matt tells us.

Even though the love in their house was certainly never wasted, the experience was still a heartbreaking one. Despite all of it, Natalie and Matt still plan to move forward in their journey as foster parents,
“There are so many kids in that scenario, even if all we do is provide five months of a loving, caring place for them to be, that might be the only real family that they ever experience. I don’t think we can underestimate the effect that has on kids.”

“We always try to have a family discussion to make sure everyone is okay with it before we accept a new placement.”

But after some careful deliberation, they knew that the timing wasn’t right, and together Zach and Ambrosia initially declined.  Later into the evening, however, around 8 pm, the phone rang once more: still, no placements had been found, and Ambrosia realized that all four children were really just searching for a place to sleep. With this in mind, Ambrosia gives DHS permission to bring all four kids into their home and hangs up to let her husband know that in about ten minutes time, there would be company arriving at the door.

“Well, I guess I’ll unload the dishwasher,” Zach joked initially; telling the story later, he says, “and just like that, we went from a family of five to a family of nine!”

After a nearly sleepless night of introductions and adjustments, Ambrosia brought all four children in to receive physicals. Amongst the four of them, there was very little evidence of care, and all were in need of vaccines and medication.

Later that evening, two of the four children had found homes and the remainder of the bunch were to be moved to a new placement in Clear Lake. However, because there was no transport available to them until morning, the final two would be spending the night in a shelter. Not in favor of this outcome, Ambrosia made additional plans and took the children to Clear Lake on her own that night.

Since then, Zach and Ambrosia have continued to follow the case, and continue making a difference in the lives of children in foster care with the support of communities like Cedar Valley Angels;

“It’s a beautiful ugly mess, and it’s hard but so many beautiful things can come from it, and as long as you keep laughing like Zach and I do, you will get through it.”